PowerPoint Is The Cockroach Of Office Software

A Defense Of PowerPoint

There have been a lot of articles recently citing the death of a certain pillar of Microsoft Office PowerPoint. I say this is not a fault of PowerPoint but one of our own doing.

There are several contributing factors that have led to memes like this but the finger-pointing should not be at the software itself. 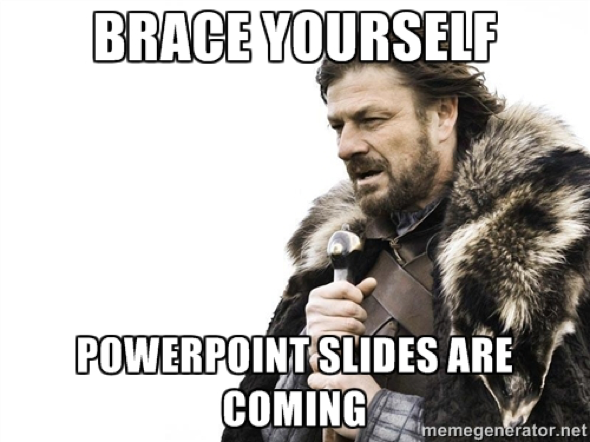 PowerPoint is chock-full of amazing tools and untapped potential that make it hard-wired to survive the evolving world of business. Not unlike the cockroach, its adaptability and consistency in purpose will be enough to get us through any ice age.

One of the most common reasons I've seen headlines condemning PowerPoint is due to its main competition-Prezi. Another presentation software, Prezi offers a creative take on presentations. Their non-linear format, the freedom to seamlessly zoom from one section of a presentation to another without a set agenda, was a revolutionary new form of presenting for those that had the patience and time to learn its self-termed ZUI technology. Their templates and setup are rich in color and the animations, dramatic. Even though it's considered faux pas to include a slide-in-animation on any standard PowerPoint, Prezi accomplishes its animations with such slickness, people call it professional showmanship instead of cheesy.

However, if we're comparing them tit-for-tat, PowerPoint does offer a feature called Morph in which similar animations can be achieved. There are also ways to build menu options that take you in and out of any section of a deck.

Recent research had participants describe Prezi as "engaging, interactive, visually compelling, visually pleasing, or vivid" over PowerPoint. Even if those workers had less experience working with the software. The medium is not the message, but it may be the mechanism. Prezi's virtual canvas is a more engaging and enjoyable experience for an audience.

Another facet of the Prezi allure is that their files are entirely shareable online. But as PowerPoint Online and Keynote Live features are developed, we see this as a movement for digital file-sharing and that everyone is moving in that direction anyway.

The reality is in the marketing, business, and sales universe, PowerPoint's ubiquity will win out over Prezi. It's considered standard and indeed, comes in the original Microsoft Office suite so you can't have Word without the other. It owns an estimated 95% of the market. Creative industries have rightfully embraced Prezi's alternative presentation style but if you want your deck to scale across the whole company, you need a file that is easy to share and one that everyone can open and work with. 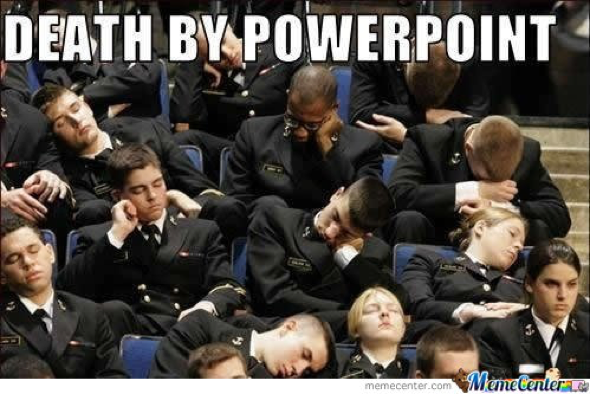 A header followed by a list of basic bullet points in Arial is successful in that it's a simple, easy-to-follow layout. But have you considered each point-supurpose? Can some of those points be talking points instead? So often, presenters will utilize a bullet point list to simply write out everything they want to say. There might be one purpose to convey represented by five points. A better solution is to have a 1:1 ratio of purpose:point. Better still, develop a visual representation of those points.

Bullet points were invented to synopsize a message, to make something succinct and clearly. (I mean, I don't actually know if this is historically accurate, but I imagine it to be along those lines). They've been so watered down by their over-use, that they no longer carry weight or demand someone's attention on a slide.

They're great for making notes to yourself, but they're best left in the Presenter Notes section. 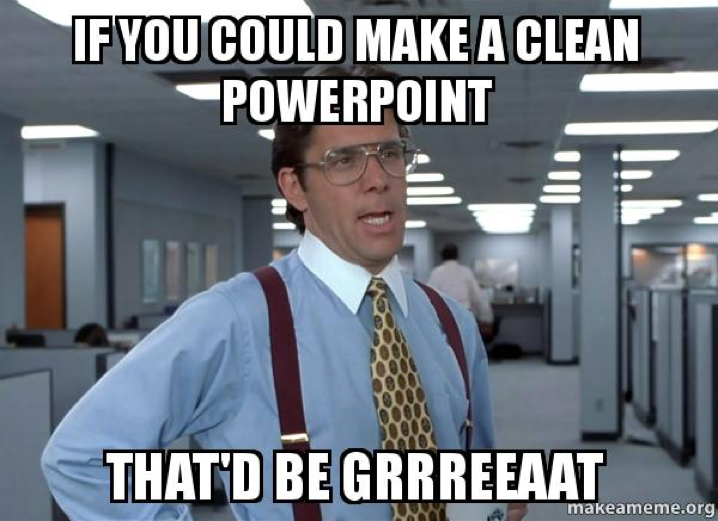 More than anything else, being bored by PowerPoint is our own fault. The software, at its very core, is an aid to assist in telling a story. And if we can't successfully do that, we can't blame the tool. You wouldn't blame a drill for a faulty chair. It's purely an operator error.

If the story you're telling is about a new HR policy, I understand it's not exactly a Final Destination type of thrill. But there's a story behind every presentation, it's just about finding a compelling way to tell it. If you're the presenter, how can you relate to the audience? What story are you trying to tell and for what purpose?

YOU are the storyteller and PowerPoint is your tool - not the other way around. Queen of storytelling Nancy Duarte says: Presentation tools force you to think through information linearly, and you really need to start by thinking of the whole instead of the individual lines.

PowerPoint, especially now with its PowerPoint 365 capabilities constantly evolving and auto-updating has the characteristics and adaptations necessary to withstand the long-haul.

Whether that's the apocalypse or the company-wide quarterly, it will get us through.

It is the cockroach of office software and it is here to stay for a long, long time.

Formatting and design hacks for tables in Google Slides & PowerPoint.

Why You Should Hire a Presentation Design Company