Can the political scene learn a thing or two from the presentation world?

Election season. It can bring out the best and worst in us. The level of propaganda-filled ads, catty Facebook statuses and ensuing online arguments hit new lows while the quality of memes, GIFs and general internet banter brings its consistent A-game.

With this presidential cycle well under way, we—ve already been through a series of debates that came along with a good few hashtags and viral phenomenons. These debates are opportunities for candidates to gather your support, your vote—they—re trying to sell you . . . And I can—t help but wonder if there might be—just maybe—a more interesting way to do this.

Because how different, really, is a presidential debate than any sales pitch you—ve ever seen?

They are comprised of the same components: the mediators are like the hard-to-win investors asking tough questions. There are time restrictions to ensure that speakers remain succinct in getting to their points. And the audience—well, the audience is admittedly a little different than the investors you speak with or the people watching Shark Tank. But still—it's a public display of asking for a kind of investment.

Hear me out, would it not be much more convincing to see plans to reallocate the student debt bubble for college education with an animated dataset? Or how our domestic policies will evolve with bright infographics?

Yes, I—m talking visual aids. Downloadable decks. The kind you email to yourself after the meeting ends and you realize you—d been dozing since the fourth slide. 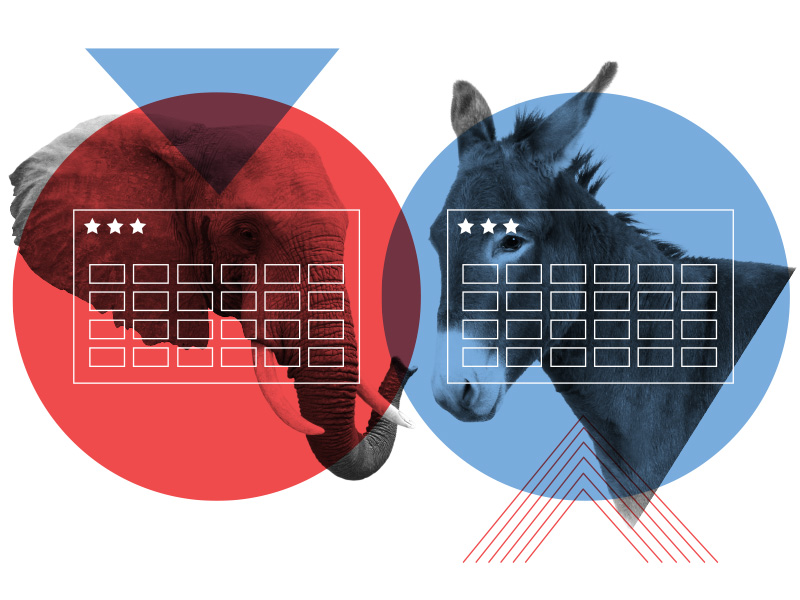 So what if presidential candidates presented sales decks instead of standing behind podiums?  What if they had slides to project their infographics, outline talking points, and visuals to assist where words fall short?

If you were to put a Powerpoint clicker in the hand of any political candidate and throw a projector screen behind them, it would look no different than a TED Talk—and how many more TED Talks have you watched than presidential debates? Although one of the last Republican debates brought in the highest number of viewers in recent campaign history, it still only comprised 15% of the US population. Approximately twenty times more people have watched Taylor Swift—s —Bad Blood— music video.

These are the leaders we—re electing to office, should they not be given a platform as compelling as any other viral BuzzFeed-worthy content?

I want to be engaged with the White House hopefuls in the way I feel engaged watching Ken Robinson speak about how schools kill creativity. Or Brian Chesky give his brilliantly minimalist initial Air BnB pitch.

These are different platforms with different audiences, yes. However, all of these people are discussing important, relevant topics—why should the ones that have political power not be shared and accessible on Slideshare later on?

Debates are an integral part of any election process. But just as the tried and true format of Sales Pitches Past—we have to evolve with the times.

How do you think a sales deck style presentation would change the campaign game?

To make it count, presentation workflows need to be intimate, iterative and responsive.

3 Things to Consider Before Stepping Up to the Mic