Whether you’re preparing a business presentation or working on graphic design concepts for your business, the font types you choose can make all the difference. However, with literally hundreds of thousands of fonts available to choose from, it’s not always easy to know which font would work best for a given project. It can also be difficult to recognize the subtle details between certain fonts since many styles today can share many similarities. Read on to learn more about the defining characteristics of different types of fonts and the typical applications of each.

Different Types of Fonts and How to Use Them

Fonts vary widely by shape, size, and style. Although there are innumerable fonts available today, the vast majority of them can be organized into three distinct categories. These font types include serif, sans serif, and formal script.

Easily one of the most recognizable fonts in the world, serif encompasses a large family of stylized fonts used in book printing for centuries. Letters in serif fonts contain extra strokes often called “feet” which help make the written word easier to read. The elegant, traditional look of serif fonts makes them ideal for presentations or professional correspondence.

The most definitive form of serif typeface in the 18th century was the Caslon font, invented by William Caslon in the early 1720s. This form of serif font uses a character known as a long s which resembles the lower-case letter F and a conjoining stroke is applied when the letters CT are alongside each other in a word. On the page, 18th-century typefaces like the Caslon font give the writing a romantic, sophisticated quality. However, 18th-century fonts can be difficult for modern people to read, especially when displayed on a screen.

By 1757, a man named John Baskerville sought to improve upon the Caslon font by introducing a different style of serif text. This new Baskerville font was easier to read as many of the curvy, stylized accents of earlier serif typefaces were removed altogether. Today, transitional serif fonts like the Baskerville font remain in popular use, creating refined, elegant text blocks that closely resemble modern fonts like Times New Roman.

These wider serif fonts are usually used today in promotional materials, t-shirts, sports jerseys, and book covers. Slab serif is also commonly used on signs for business storefronts or movie posters. With its bolder strokes and blocky feet, slab serif fonts are perfect for grabbing the reader's attention at a glance. On the other hand, using slab serif for entire sentences or paragraphs can be a little overwhelming to many due to the sheer weight and width of the letters. Some popular modern renditions of slab serif fonts include Courier, Rockwell, and Clarendon. 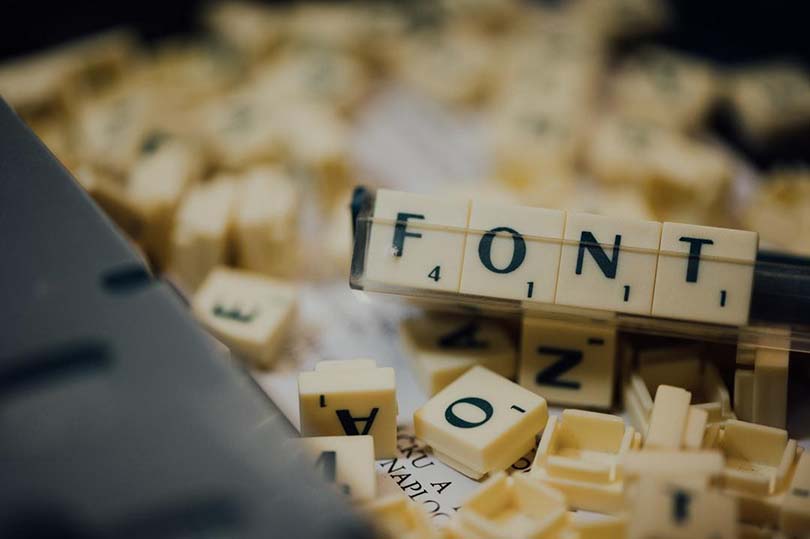 In French, the word “sans” translates to “without”, and as you would suspect, sans serif fonts do not contain the extra strokes seen in their serif counterparts. Instead, the letters in sans serif typefaces are reduced to their most simple form to create consistent, easily readable text. Within the family of sans serif fonts, three main subcategories exist.

Symmetry is one of the most important universal design principles for presentations, making geometric san serif fonts a good choice for leaving a powerful impression during your next business meeting. With geometric fonts, curved letters take on a circular, rounded appearance. Meanwhile, letters with sharp angles have a more angular shape. The bolder, more pronounced appearance of geometric fonts makes them perfect for company logos, letterheads, or advertisements.

This type of sans serif font is fashioned after traditional Roman lettering. Humanist fonts are distinguishable from other sans serif fonts due to the continuity of width in the strokes. In addition, humanist fonts are made to resemble cursive handwriting in some respects, giving the typeface a uniquely natural appearance. While quite popular during the medieval era, many graphic designers and publishers today tend to prefer using less archaic typefaces for printed materials.

Grotesque typefaces first appeared in the late 19th century and were characterized by stylized curves to many letters with varying stroke widths. Gradually, grotesque typefaces were refined into various neo-grotesque fonts people may recognize today such as Helvetica. In design speak, neo-grotesque refers to a type of sans serif font that contains sharper, more defined strokes and fewer variations between the proportions of letters.

With formal script fonts, letters appear as though they were written by hand following a traditional calligraphy style. The elegance of these decorative fonts makes them an appropriate choice for invitations to events like weddings, banquets, or other formal gatherings. Some forms of decorative fonts contain highly exaggerated accentuations to specific letters while others are more subdued to resemble natural cursive handwriting.

Use the Right Typeface Style for the Job

The type of font you choose to use will depend upon the purpose of the writing, your audience, and the impression you hope to make on readers. For business presentations or informal correspondence, a modern serif or sans serif font will usually be the solid choice. Some of the most popular fonts used in daily communication today include Courier New, Times New Roman, Helvetica, Calibri, and Arial. For more high-brow occasions, you may want to select a traditional font style like an 18th-century serif or a striking display typeface.

If you want to create a presentation that stands out from the crowd, our experienced team at GhostRanch can help. As a leading presentation design agency, we know how exactly what it takes to turn an otherwise drab PowerPoint into a visual masterpiece that resonates with your audience. Our visual storytelling professionals have years of combined experience creating one-of-a-kind presentations for our clients, paying careful attention to subtle details like font, negative space, color, and symmetry.

If you want your next presentation to leave a lasting impression on coworkers and colleagues, contact us today to get started!

Save Selections to be Reselected in PowerPoint

...because grabbing things can get tedious.

Why Won’t Drop Shadows on Text Appear in PPT?

How to create graphics that will scale and move with a text box in PowerPoint.

The Role of Data Visualization in Presentations